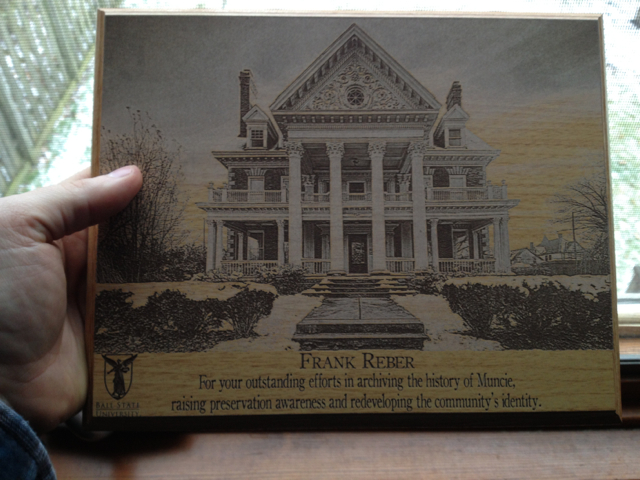 Ball State University presented me with this sweet plaque tonight for being part of the Historic Muncie crew. I have been in charge of audio production, scoring, and mixing all of the audio for the Historic Muncie documentaries that are being done. Pretty snazzy.

Here’s a short documentary that Lauren Reber and I created for Judi Lee who came into my recording studio, Reber Recording, to record a 5-song EP comprised of songs written by bands from Indiana’s past. This is my first attempt at documenting a recording session in this way. I work with audio so this video stuff is still pretty new to me. That being said, I look forward to making more of these. Feel free to like the studio FB page!

Tonight I had the pleasure of recording Judi Lee at my studio, Reber Recording. We recorded five songs in 6 hours. That’s pretty impressive considering that she played bass, guitar, drums, and then went back and did vocals with additional harmonies.

This particular session was about recording songs by five different bands from Indiana’s past. These songs were selected by Judi as a sort of tribute to the bands that she saw growing up in the local music scene. In addition to recording the songs, I also filmed the entire process to make a short documentary about the project. It is going to take me a little while to edit but once it’s done I will be sure and post it for all of you to view.

Thanks again to Judi Lee for being so cooperative with the processes involved in filming a session. Not everyone likes having a camera shoved in their face while they are trying to record.

That’s enough for now. I need to get to sleep. These long Fridays have a way of testing my endurance. This is Frank, signing off.

Sometimes Indiana can be pretty beautiful. There’s just something about the sun setting over vast stretches of corn fields that make me feel good inside. As far as I’m concerned, it sure beats the hell out of skylines filled with buildings and concrete. I mean, if buildings and cement are what you’re into, I guess it’s not so bad. I’m just not all that impressed with the lack of nature in the bigger cities I have been in. Indiana is rooted deep in my bones and despite the thousands of people that want to complain about how bad they think this state is, I find that it reflects the individual. Indiana is a boring place if you’re a boring person.

In this episode I am joined by roller derby sensation, Bruisey Ricardo of the Cornfed Derby Dames from Muncie, Indiana. She shares a few albums that she has pulled from her collection. So sit back, relax, and enjoy the tunes and silly dialog. If you want to learn a little bit about sexy sandwich time, I suggest you give a listen!