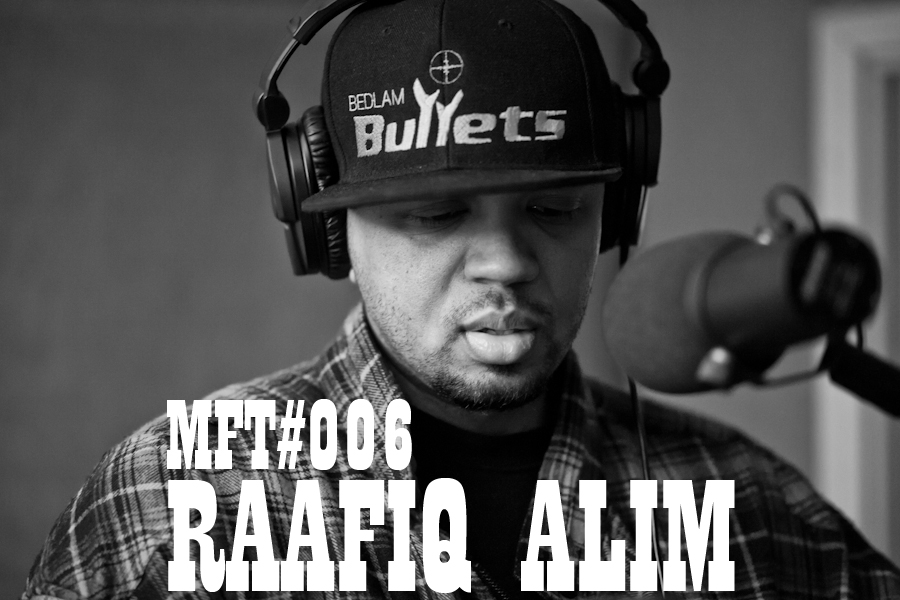 This week I am mixing things up a little bit. Until this point I have only featured bands and acoustic artists… This week I had the opportunity to work with Raafiq Alim (formerly known as Merc Versus), a 10-plus year veteran of the local/regional underground hip-hop scene. He has been compared to such diverse artists as Mobb Deep, Outkast, Wyclef Jean, Wu-Tang Clan, and A Tribe Called Quest. His inspirations include Kool G Rap, Sam Cooke, Bad Brains, Peter Tosh, and The D.O.C. Being from a unique geographical location in terms of hip hop (Indiana), Raafiq represents a rare perspective of the culture. He is currently Vice President of the Indiana chapter of the Universal Zulu Nation and is managed by former Def Jux artist and underground hip hop legend C-Rayz Walz.

The first three songs featured in this session are a collaborative effort between East Harlem, New York native Udi the Erratic Assassin, Indiana native Raafiq Alim aka Merc Versus to form BEDLAM BRETHREN. I took my time to fine-tune these tracks and add subtle changes to make the listening experience unique. The final 2 tracks are previews of a second collaborative effort titled, Mystery School. The Mystery School tracks are not complete. They are merely previews featuring Raafiq Alim’s contributions. The finished versions of these songs will be made available on an upcoming album titled, “Class Envy.” There is no set release date as of this time.

Created with Admarket’s flickrSLiDR.
If you’ve been following the MFT sessions that I have been releasing you may notice that this particular session is a bit different; and not just in terms of genre. The whole performance is a different creature. There are no amplifiers or drums for me to capture… the music is essentially pre-recorded and ready to go. This makes it rather difficult to capture the feel of a live performance and so I have opted to approach the hip-hop genre a bit differently. Although there are still elements of the live performance in terms of vocals, I have opted to create a unique mix of the music in addition to the vocals so that there are subtleties in the music that you wouldn’t be able to hear anywhere else. But that’s enough shop talk… I was fortunate enough to sit down with Raafiq Alim and ask him a few questions regarding his transition from Merc Versus to Raafiq Alim, his affiliations with the Zulu Nation, and his outlook on current hip hop trends.