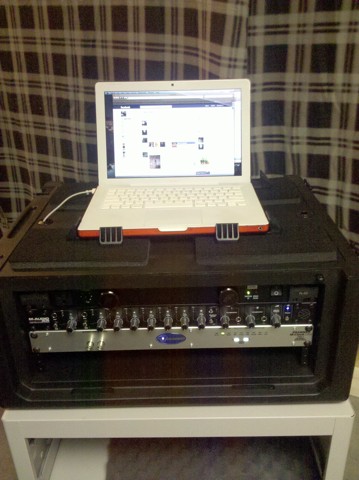 I know, I know… Another studio upgrade right? Well, it’s all part of the growing and expanding process. This new mobile recording setup will serve two very important purposes. The first of which is giving my studio a solid Pro Tools M-Powered 8 compatible interface. This enables me to work with clients that have already started recording in other studios using other platforms (such as Logic, Nuendo, and Pro Tools).

As an example, next week I will begin working on a full length solo album for Joel Green (former bassist for Emery) and he had previously started recording at The Gallows recording studio using Pro Tools. This new rig integrates to my existing studio setup and allows me to finish working on his project in the native environment that it was recorded in.

The second purpose of this mobile recording rig is to allow me to record at remote locations; whether it’s a live performance at a venue or recording an album in a house). I understand that there are situations where it’s cheaper to bring the recording studio to the band rather than the band to the studio. After all, if a band is traveling from out of town with 4 members they have to pay for four members to exist (eating, drinking, and sleeping) for the duration of the recording process. When I go to the band I am only paying for myself which is significantly cheaper. Also, this broadens my client base to anyone in the United States interested in my services.