Here’s a couple of goofy short videos of Lauren and I doing our thing at The Caffeinery. 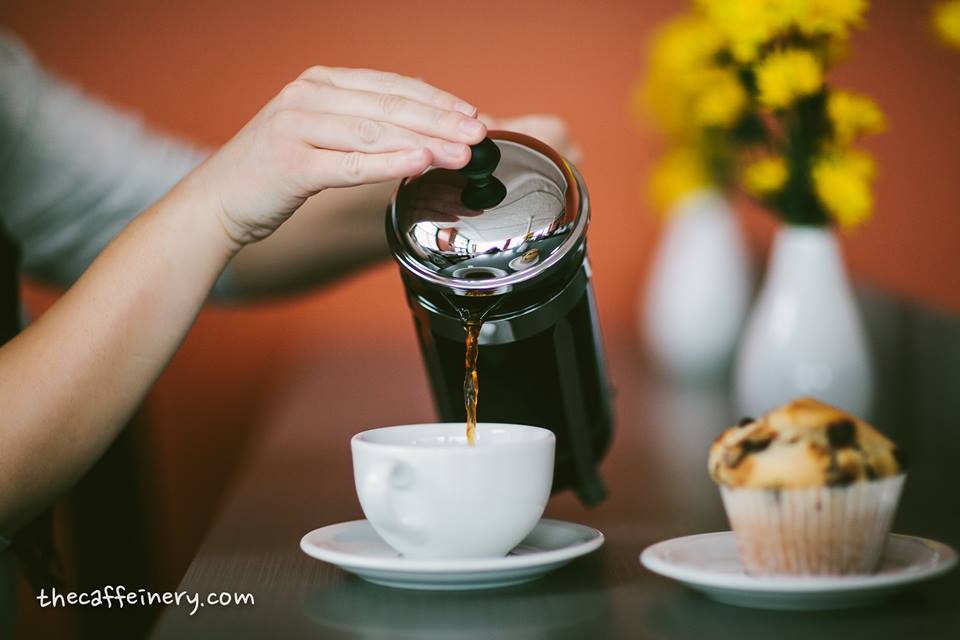 Today is the official grand opening of The Caffeinery! We will be open from 7AM until 7PM! Lauren and I are feeling an interesting mix of excitement and nervousness. It’s time to see if the past two years worth of research and planning will pay off or not. Here goes nothing! 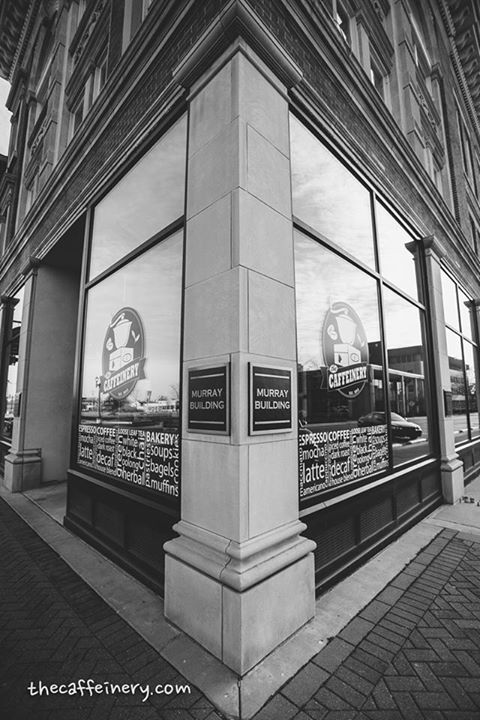 After much anticipation and even more delay… it’s finally time for Lauren and I to open up the coffee shop that we’ve been talking about for what feels like an eternity at this point. We’ve jumped through all of the hoops that required jumping and now we’re ready to welcome the public into our space to consume some of the best coffee that the world has to offer! We don’t want to divulge too much too soon so I will keep this short and sweet. Our grand opening will be on St. Patrick’s Day… March 17th, 2014. We hope to see you there!

For those of you that pay any attention to the things that I do in real life, in addition to the internet, you have more than likely heard/read something about my wife, Lauren, and I working on opening up a coffee shop in downtown Muncie. This is true. As far as the internet and social media is concerned, my wife and I look like we are as busy as humanly possible. This is also true. I have been running a recording studio, teaching part time at BSU whilst simultaneously attending as a grad student, undertaking a number of significant home renovations (floors, bathrooms, paint, landscaping, and etc.), and doing all of the due diligence that comes with starting up a coffee shop. These are just the things on my plate, Lauren is dealing with her own obstacles. We are just busy.

I have now reached a point where I can no longer take on any additional projects without reaching a breaking point. Having so many projects going on at a single time is definitely rewarding in a lot of ways but it adds a ton of unnecessary stress. Stress is something I’m not fond of and in an effort to keep it from reaching undesirable levels I have decided to make a few changes before things start to ramp up with the coffee shop. I’ve already implemented a few changes but I figured this is as good a place as any to unveil my master plan to consolidate and alleviate. My first step was to take a pass on renewing my graduate teaching assistantship at Ball State for the time being. There’s just no possible way that I can manage teaching 20 hours a week on top of being a full-time grad student whilst managing the coffee shop. For one, there aren’t enough hours available in a day for me to make this work, and two… I simply wouldn’t have the energy to do so even if I wanted to. So yeah, it has to go. So basically, I’m going to put graduate school on the back burner for the moment. The sad part is that I’m pretty damn good both teaching and being a student. During my two semesters of grad school I nearly pulled off straight As with the exception of a single B (which I think is total bullshit). All is not a loss though, I learned that teaching audio production is something that I enjoy and if I choose to finish out my Master’s Degree later on, it will be an option so long as I do it within the next 3 years.

So in one fell swoop I have eliminated two enormous burdens from my schedule; teaching and graduate school. But I’m not going to stop there. Nope. As of this moment I am currently planning on the coffee shop being open from 6AM until 7PM Monday through Friday and from 10AM until 2PM on Saturday. Lauren and I will be dividing these hours up amongst ourselves but due to her busy photography schedule during the wedding seasons, I will be working the majority of the hours during those times. What this all boils down to is that I will have to drastically cut back on booking recording sessions at the studio to being nearly non-existent. Up until now my schedule has largely been determined by scheduled recording sessions. There are times when a single band will book full 10 hours days for a week straight and I’ve always made it work. Even when I was teaching and attending grad school I was still able to schedule around everything without too much difficulty. Alas, with the coffee shop up and running, the only way I will be able to schedule a recording session that spans multiple days is if I coordinate with Lauren to cover for me at the shop. So while I’ll still be able to maintain my studio work, it won’t be without its scheduling obstacles. All is well though, to be honest, recording work in Muncie has been particularly slow this past year and a half which is one of the main reasons that I decided to open a coffee shop. There are far more people that consume coffee than there are that require professional recording services. This realization has caused me to make a choice… I could either let the recording studio, that I worked so hard to create, sit and collect dust or I could give it new purpose that was more compatible with my new schedule. Collecting dust is not an option to me so that left me the task of repurpose.

It is important for me to note that the need for professional recording studios has been experiencing some shrinkage. This is due to a wide range of factors including, but not limited to, the recession/depression, the decentralization of the music industry, and the advances in home-recording technology that are making it increasingly affordable for musicians to record themselves. While Reber Recording has been self-sustaining, it is by no means a cash-cow. Recording is a labor of love for most recording engineers and if you are someone that chose the career to become one of the rich stereotypes portrayed in music videos, the odds are stacked against you. The majority of records that I have had the pleasure of working on were not paid for by wealthy record labels. Rather, they were paid for with money saved by the members of the bands. In a few rare instances, the session was paid for by a kickstarter campaign. The point is, there’s not a lot of money to be made in this profession. I do it because I enjoy the role of historically preserving the music of my time. But I digress… If I am only able to record a select few bands per year, how can I best utilize my skills and facilities to better the music community as a whole?

I have decided to repurpose my recording studio and its internet-presence to serve as an educational entity. As I mentioned earlier, the year I spent teaching audio production at Ball State University opened my eyes to the impact that my words could have on much larger body of work than I would otherwise be able to produce on my own. The most efficient way for me to disperse my knowledge of recording is to make a series of YouTube lectures, demonstrations, and recommendations aimed at helping home-recording enthusiasts and aspiring recording engineers to achieve the best possible results with the tools available to them. This would eliminate any scheduling conflict that would arise with teaching a traditional class. Plus, I can break down my 2-hour lectures into topics that fall between the 2-10 minute range. This effectively combines my passion for teaching and recording into a single attainable goal. I figure I might as well embrace the changes being brought on by the industry rather than pretend that they don’t exist. It would be much easier to cater to the increasing number of people preferring to record themselves rather than to try and convince them to go into a studio proper. It all boils down to the intended audience…. but that’s the topic of a future video. I have already began making notes for a couple of episodes in addition to creating the following channel: http://youtube.com/reberrecording

My fiance and I decided that we needed to get away for the weekend so we took a trip down to one of our favorite vacation spots… Gatlinburg, Tennessee. It’s such an ideal place to relax. It’s tucked away in the smoky mountains and is such a quiet and relaxing place. Anyway, sometimes it’s just good to get away and mix things up from time to time. This is our second trip to Gatlinburg as a couple. We love this place. This particular trip was a bit different because we were meeting up with my Uncle Terry and his son, Braydon. They had booked a room at the River Lodge for the week and invited us to come down and share the room. Of course, we couldn’t refuse. I mean, we love it there!

While we were in Gatlinburg, we did a little bit of everything. We shopped, hiked, saw some of the sights, visited one of the largest knife shops in the US, ate some food, bought some moonshine, and did some good old fashioned hanging out. We had a great time. It was a much needed reprieve from our busy work schedules. Being that we’re both free-lance, we spend a lot of our free time working. It takes a lot out of us.

By the way, these amazing pictures were taken by my beautiful fiance, Lauren. You can check out more of her work by visiting her blog!

There are very few things in life that have the ability to completely destroy my ability to get things done in a timely manner. My car breaking down and needing to be repaired is definitely one of these things. Now, my car has a decent amount of miles on it (170k), so it’s expected that larger repairs are going to become more and more frequent. So yeah, my baby was sick and she needed to see the doctor. The dealership gave me a rental car for the duration of my repairs. I ended up driving it for two full weeks while they repaired my car. Ah well, 2-week and $$$$ later, I now have her back and she’s good as new. She still has plenty of road trips left in her.